To answer this, we used our geolocation foot traffic panel of 2 million U.S. consumers to track visits and foot traffic to businesses like restaurants, retailers, grocery stores, and many others.

In states with decreasing rates of new COVID-19 cases, it appears consumers have not shifted their food consumption back toward restaurants to as large an extent as they have in states with increasing COVID-19 case counts. However, this pattern is driven heavily by the decreasing case counts and slower return to restaurants in NY and NJ specifically. For other states, there does not appear to be a strong relationship between the extent of restaurant visitation and the change in COVID case counts.

Foot traffic is improving at the national level.

The protesting and curfews in several major cities didn't appear to have a major impact on total foot traffic earlier this month. Additionally, the prevailing media narrative has been one of concern about states reopening and a second wave of coronavirus, but that doesn't appear to have had a severe impact on the recovery of foot traffic. Generally, the trend still continues to be that foot traffic is recovering. It is still below the baseline of February, but it's bouncing back and has recovered quite a bit compared to low points in mid April, especially around Easter Sunday, which was the single worst day for foot traffic during the coronavirus time period.

To gauge consumer sentiment, we've been surveying our panelists for the last few months regarding when people expect a return to normal daily activity. 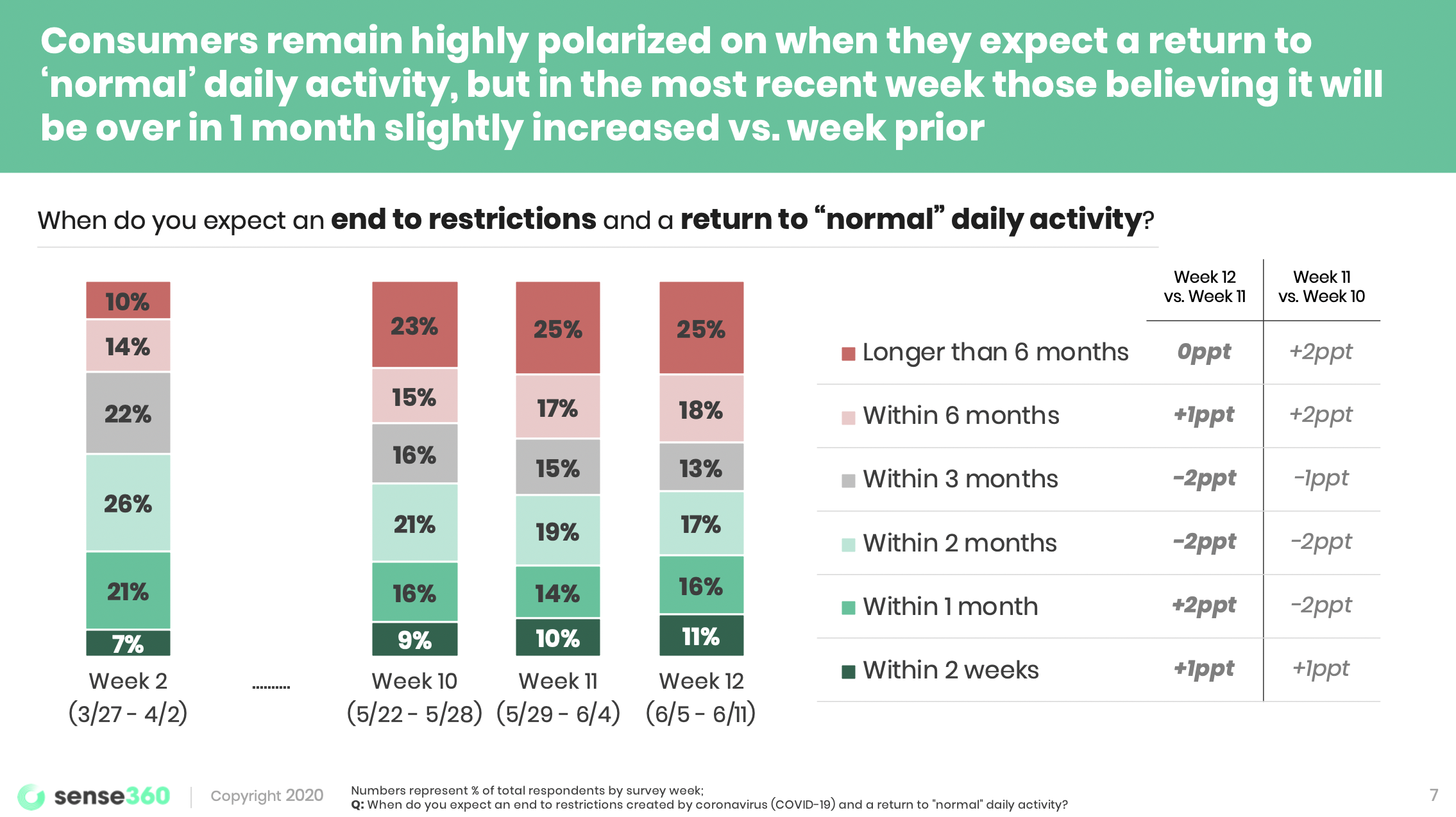 Over the past few weeks, we've seen a slow increase in the proportion of people who expect coronavirus restrictions to last longer than six months. When we first ran the survey in late March, that number was only 10%, but by June it grew to 25% and is now holding steady. The increased pessimism in May might have been related to the lackluster return to normal activity that occurred in several states, even after they reopened sections of their economy.

But still, pessimism is slowly dissipating.

We also survey consumers on their level of concern regarding the coronavirus. 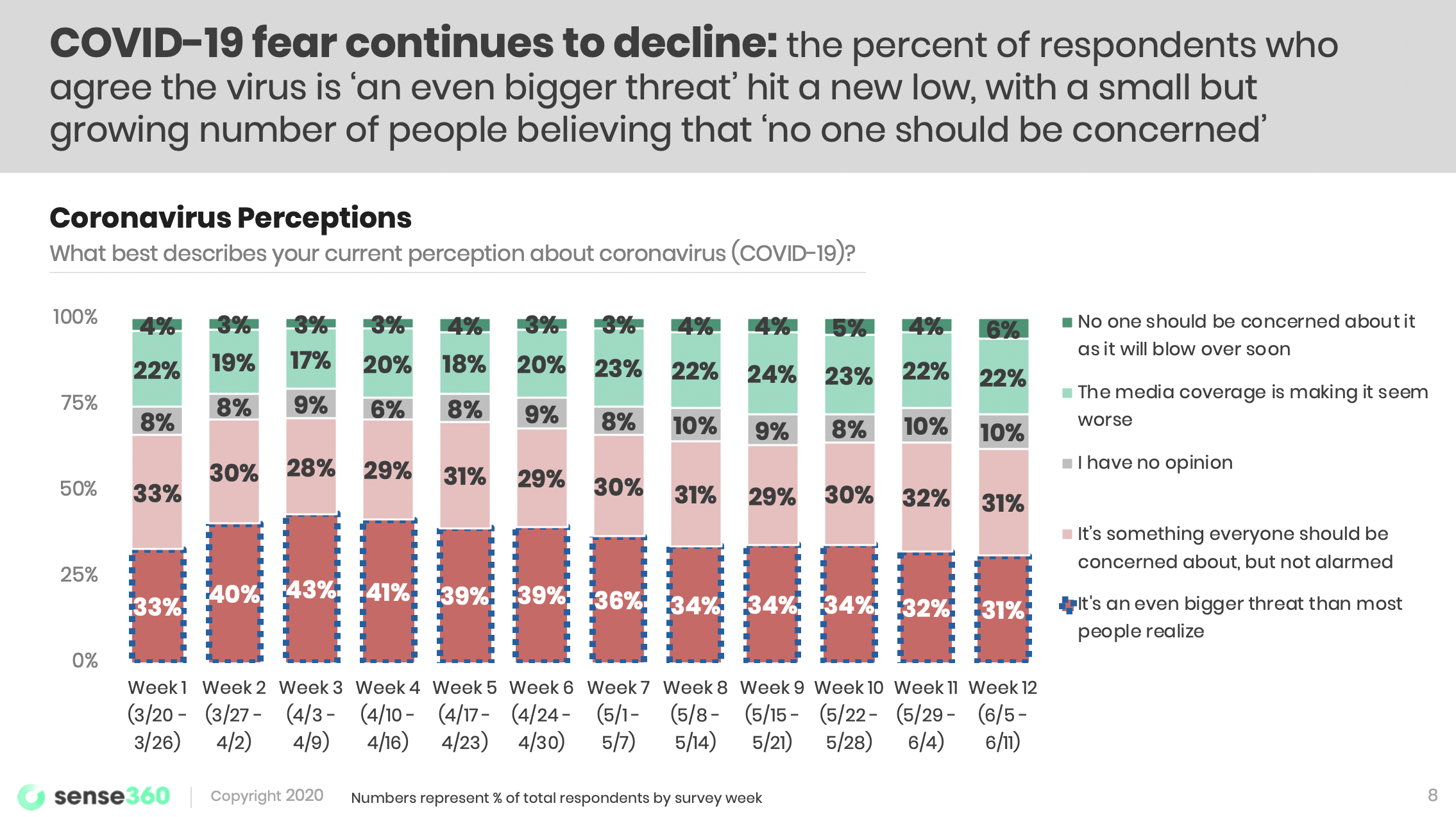 The amount of people who feel the most extreme concern is slowly dissipating. More consumers are expressing a moderate level of concern, and there is a very small increase in people believing that this will blow over soon. Overall, these survey results mark a slight decrease in coronavirus pessimism at the nationwide level.

Differences in sentiment emerge at the regional level.

However, when we zoom in by region, some differences have emerged in the most recent three weeks compared to the month prior. 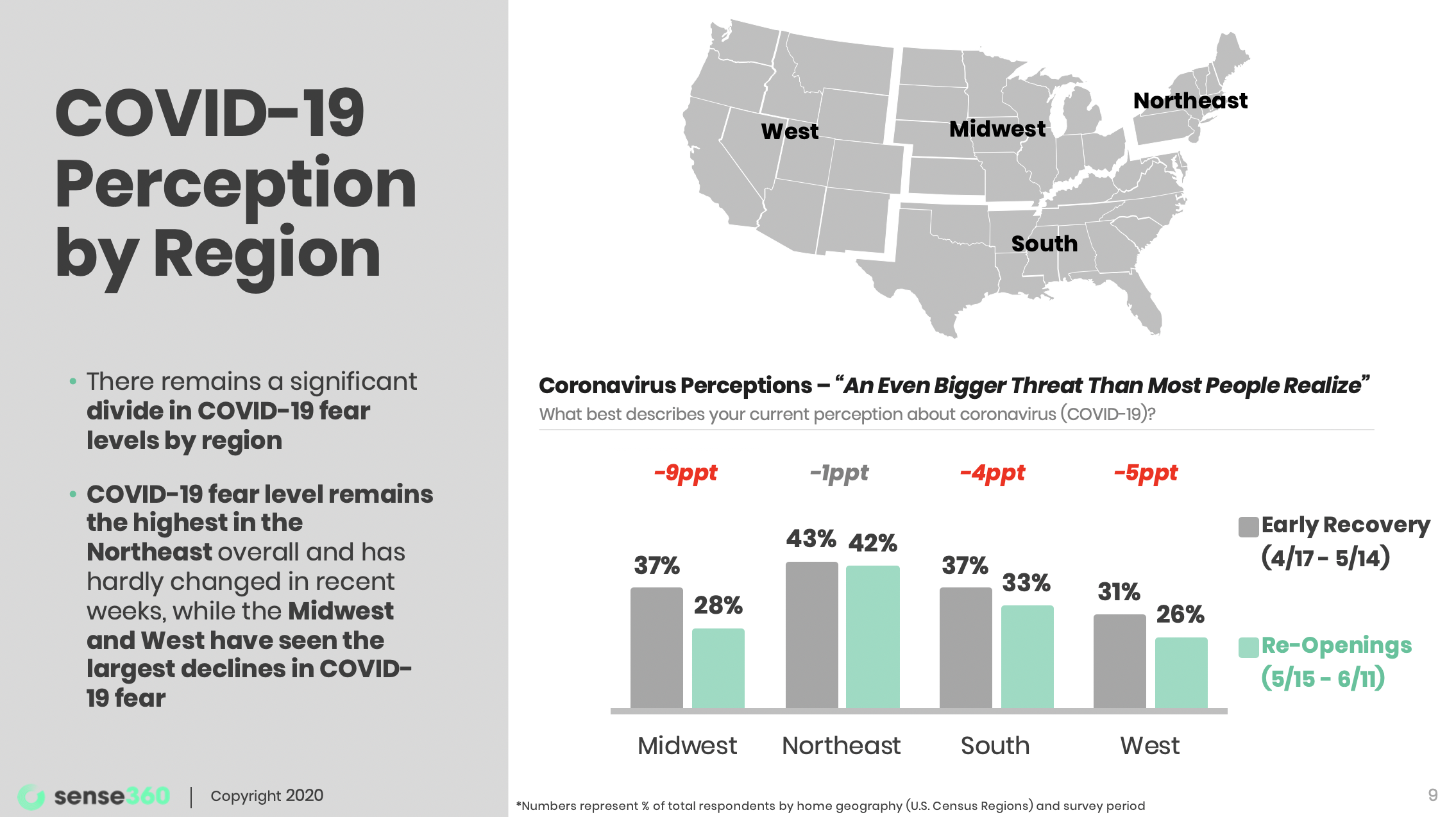 One of the reasons for this regional variance in concern level is the fact that coronavirus case counts in the Midwest are declining. 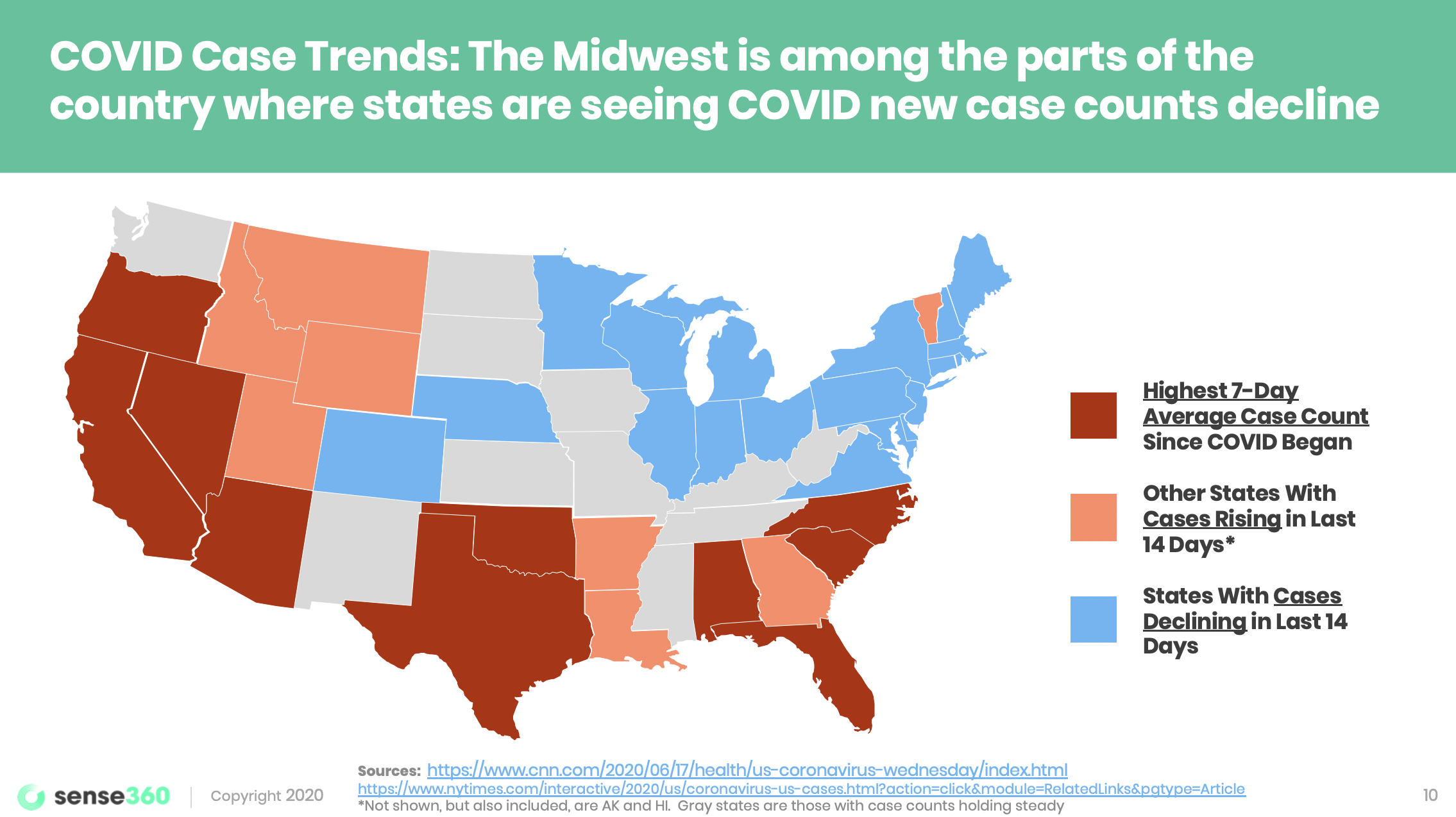 Based on data from Wednesday the 17th, there are about 20 or so States (shown in blue here) where their case count on average has declined over the last 14 days. The group of States shown in dark red here had their highest seven-day average case count since coronavirus began, even dating back to the initial outbreaks in late March through early April. And the group of states shown in orange are experiencing rising case counts, but their totals are still lower than their peak case counts.

In the pie charts below, we looked at how consumers are behaving in those three groups of States in terms of share of visits to restaurants and food retailers (based on our foot traffic data). And below the pie charts, we also examined how much total food foot traffic has recovered compared to low points in each of these States.

Some interesting patterns emerge. First we'll examine the states with decreasing case counts (shown in blue). In these states, consumers relied most heavily on food retailers (i.e. grocery, c-store, mass, dollar, drug) during the peak periods of COVID, as opposed to restaurants. Also, this group of states saw the biggest declines in foot traffic during the peak COVID period, and consequently have now seen the biggest resurgence in foot traffic in recent weeks.

The takeaway here might be that the states with decreasing case counts were the ones that adhered most strictly to social distancing policies early on. However, the recent reopenings and recovery of foot traffic might play a future in case count changes weeks from now. Generally there appears to be a lagging positive impact in states where people stayed home early on, and chose retailers over restaurants for sourcing their food.

Foot traffic patterns are different in states with declining cases vs. increasing cases. 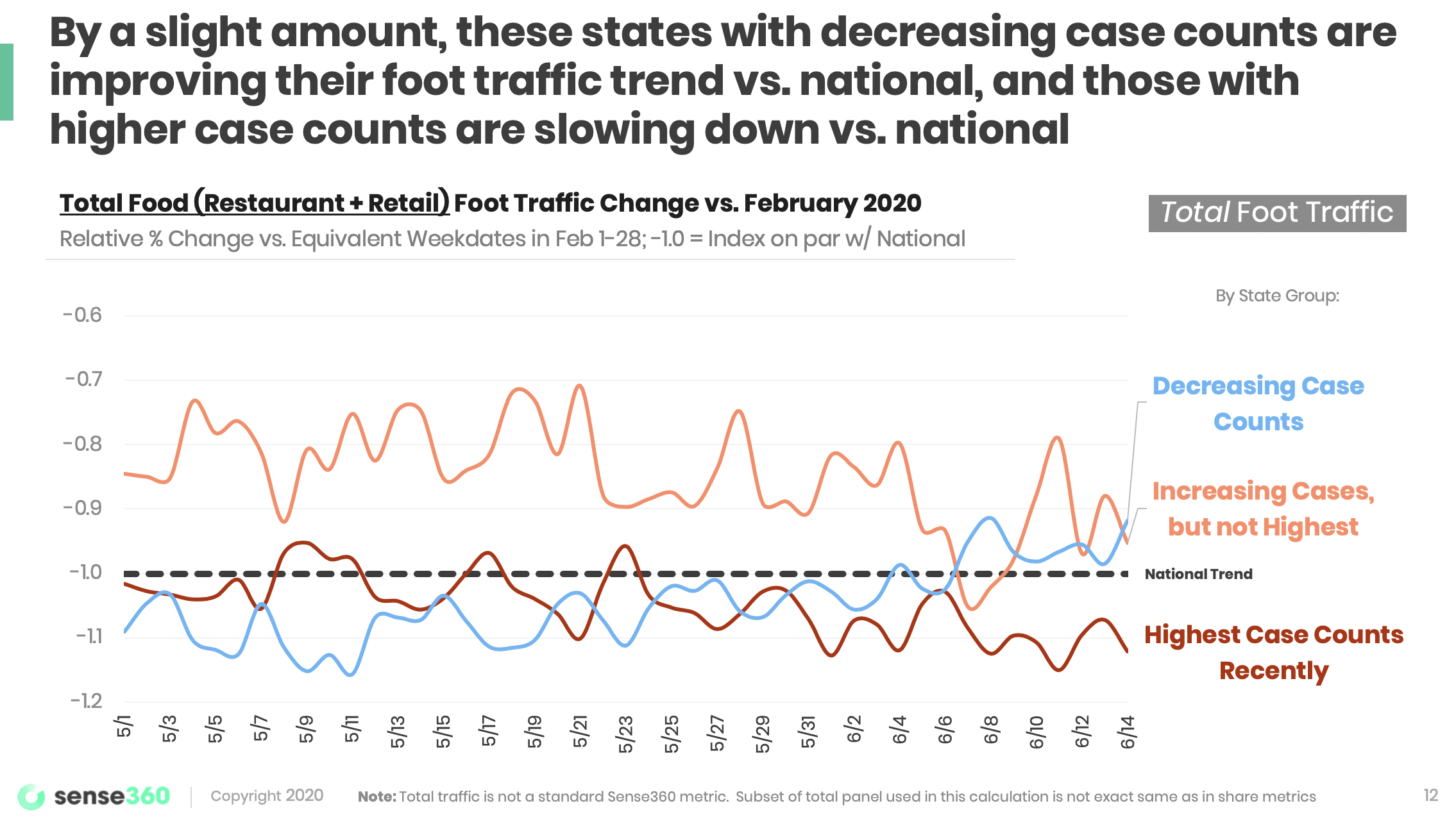 Foot traffic is recovering everywhere nationally, but if we consider that to be normalized and look at the differences between these groups of states compared to national, you can now see where the differences emerge in more detail.

In states with decreasing case counts, people favor retail over restaurants for food.

In another interesting view, we examined total foot traffic in each of these three groups of states to see how well restaurants are doing compared to how well retail is doing. The black lines in the middle shows the normalized view of how total food market foot traffic is doing group of states. And the blue and green lines show the relative difference in total foot traffic to restaurants and to retailers compared to that normalized black line. The dotted lines show the linear trend over that time period. 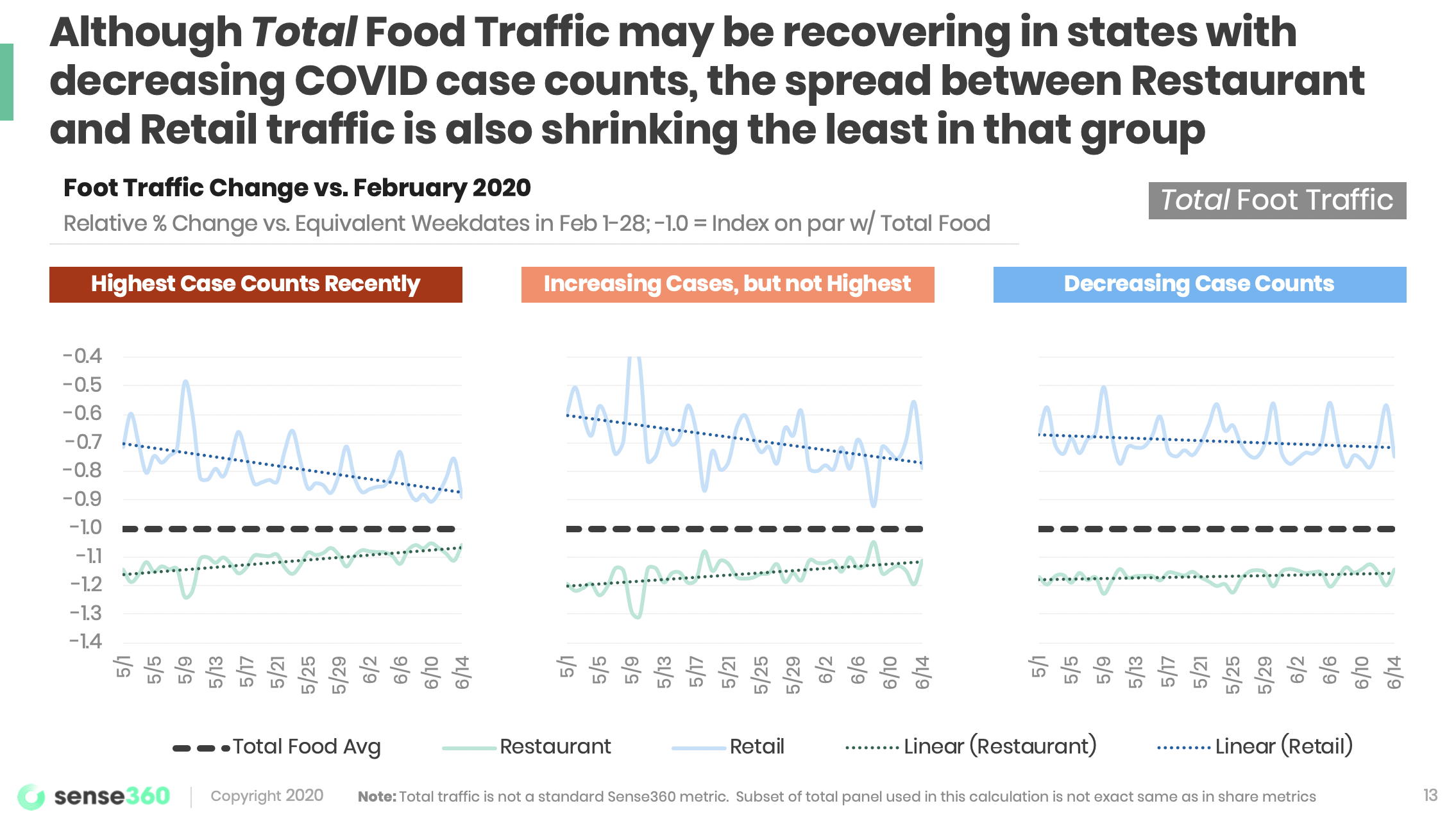 At a high level, if you were to group these states together, a likely conclusion would be that there is some relationship at play between people returning more to restaurant activity and ultimately having case counts of COVID rise in their state.

But is that trend consistent across all states with lower coronavirus cases?

However, one distinction to call out is that this is not uniform across the entire groups of states. The chart below is shows each individual state, the spread in foot traffic trends between restaurant and retail, and the net change. For instance, South Carolina shows -25% during the peak COVID period of March 23rd to April 12th. That -26% means that restaurant foot traffic was down 26 percentage points more for restaurants than it was for retailers in South Carolina during that time period. Whereas in the most recent week, we've seen that restaurants had a decline in foot traffic, only 1% worse than what the decline in retail traffic was compared to February.

The green highlights show the net improvement of restaurant relative to retail in each of these States in the most recent week, compared to what the trend was at earlier, parts of COVID. Most States are generally in the range of the teens or the low twenties, as far as how well restaurants have recovered, compared to retailers.

The only real exceptions are places like New York and New Jersey where restaurant foot traffic has barely recovered at all relative to retail. And if you were to remove New York and New Jersey from this group of States, especially because they're among the most heavily populated in this group of States, the trend becomes much less notable. Otherwise many of the states in the blue group are not behaving that differently from states with increasing case counts. In both cases, restaurant activity is recovering at a pretty equal rate across the board. So it's really just New York and New Jersey that are driving a big disparity here. And keep in mind, these were also the states that maintained some of the most severe lockdowns because they were hotspots early on in the pandemic.

To conclude, it's true that total food industry foot traffic continues to recover across all states. Both restaurant and retail together are seeing improvements, especially in states with declining case counts. One might draw an optimistic conclusion that sourcing food from retailers instead of restaurants correlates with a decrease in case counts, but this correlation is only seems to be driven by New York and New Jersey. Otherwise, most of those case-declining states are behaving the same as states that have an increase in case count. Therefore, the relationship between how much restaurant usage is occurring and whether case counts are increasing as a result appears to be weaker if you remove the effect of New York and New Jersey.

For more analyses like these, join our webinar series.