Why are Dollar Stores growing so quickly?

Dollar stores have been one of the fastest-growing retail channels since the pandemic began. Dollar General and Dollar Tree are expanding new store concepts, and shares of both companies reached their 52-week high near the end of 2020.

To put their growth in context, COVID-19 layoffs and furloughs forced consumers to focus on Value more than ever, while simultaneously consumers experienced out-of-stock issues, long lines, or felt unsafe at bigger retailers like mass or grocery stores. Dollar stores met the customer's need at a crucial time, and they continue to grow rapidly as a result.

Growth is being fueled by both more shoppers as well as higher spend per shopper. Early on in the pandemic, during March and April, consumer panic was setting in and there was a lot of stock-up behavior across all food retail channels. As grocery stores ran out of toilet paper and consumers rushed to look for alternatives, the Dollar channel saw a huge spike in basket size and a dip in transaction volume, indicating that consumers were doing big stock-up trips and preparing to hunker down at home.

After April and May, panic started fading and consumer behavior began to stabilize. However, Dollar retained a large amount of its newfound customers; transaction volume and basket size both stabilized at around +10% year over year from June onward. Dollar was well-positioned as a  Value-centric alternative to other retailers, and its new shoppers stuck around even after the wave of stock-ups ended.

Which Dollar stores are winning?

Dollar General is leading the pack, followed by Dollar Tree at a close second.

However, Dollar Tree’s momentum has been bigger than Dollar General’s; there was a +12 ppt increase in Dollar Tree's growth rate compared to earlier months of the pandemic. If they maintain this momentum, Dollar Tree will be a major growth story to watch.

Which customers are driving growth at Dollar Tree? 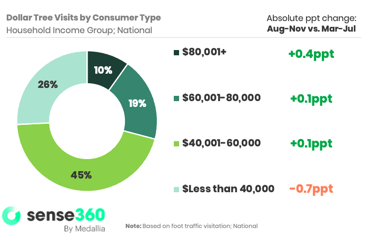 While New customers (those who haven't a purchase in 6+ months or ever) comprise a fairly small portion of Dollar Tree's customer base, there was a +21% year over year increase in spend among those New customers from March-September.

As the chart on the right shows, over 60% of Dollar Tree's customers have a household income below $60k/year, although the chain is improving its performance with higher-income shoppers.

Which competitors is Dollar Tree stealing visits from?

When up against other dollar stores, Dollar Tree only slightly outperforms them. When head-to-head against Mass retailers like Target and Walmart, Dollar Tree only wins the visit 16% and 10% of the time, respectively.

This is another indicator that dollar stores, and in particular Dollar Tree, have positioned themselves as an attractive alternative to other types of retailers.

What could the future hold?

While Dollar Stores enjoyed double-digit increases in transactions and basket size throughout most of the pandemic, these dipped closer to flat year over year in the months of November and December.

This could be due to changing priorities during the holiday shopping months, or because there were fewer unemployed/furloughed people than during the summer months.

Along with this improving trend in employment, consumers' priorities are shifting when it comes to drivers of choice.

"Best Prices" remains the most common reason for choosing a given retailer, but it is declining in importance. Meanwhile, other attributes like Quality and Exclusivity are increasing in importance.

It remains to be seen whether these changing priorities were just a reflection of the holiday gift shopping months, or if this trend will continue as stimulus checks get released and the economy recovers.

Don't miss our next analysis

To keep your finger on the pulse of consumer behavior and perception, join us every Tuesday from 9:30-10am Pacific in our weekly webinar series, The Insights Briefings.

Our next webinar will cover Restaurant and Retail Foot Traffic Trends by State. The pandemic has created a wide divergence in consumer behavior amid patchwork lockdowns and COVID case spikes across different areas of the country. On Tuesday, January 12th, we will examine foot traffic patterns by U.S. state.
Join us on Tuesday 1/12, 9:30-10am Pacific. Register for the weekly webinar series here.