Supermarkets have lost ground to the competition

During the early months of the pandemic, Supermarkets were up as much as 5-10% in market share year over year. But recently, they've softened and are now flat year over year, having lost share of visits to other retail channels like Club and Dollar.

Supermarkets have also seen a slight decline in their share of total dollars spent on food by the average person. Conversely, other retail channels have gained share of spend - especially Dollar, Club, and Mass.

Even digital grocery shopping has taken a hit. Instacart had meteoric growth during March, April and May - up almost 600% year over year in spend per capita at its height in May. But in recent months, Instacart's growth has slowed slightly, now hovering around 400% up year over year.

The slowing performance of supermarkets can be partially explained by consumption patterns. On a given day, an average of around 2 in 5 people eat food from chain grocers in a given day (peaking at 44% in late April, but not far off from that in October). However, there's more to the story.

While the vast majority of supermarket shopping is at large chain grocers, a growing proportion of shoppers report that they're visiting independent grocers instead. This is a headwind that partially explains the underperformance of the Supermarket brands we track, as shown in the first chart.

Furthermore, shoppers' priorities are shifting. When asked what drove them to choose a retailer, reasons like "Loyalty / rewards program" and "Best Prices" are growing in importance, both of which favor retail channels like Club and Dollar. And lessening in importance is "Closest location to me," which would favor Supermarkets.

Throughout COVID, Supermarket shoppers have skewed affluent, older, and suburban. All of these demographics are more likely to be able to stock up on groceries and shelter-in-place easily, due to their white-collar professions and ability to work from home. But they also able to change their habits if and when restrictions loosen.

In the coming months, Supermarkets may see an increase in visitation and spending. Survey results show that consumers expect to increase their grocery shopping in the coming weeks.

This may be related to recent news about spiking case counts in certain areas, or an increase in COVID pessimism as we head into the winter months. 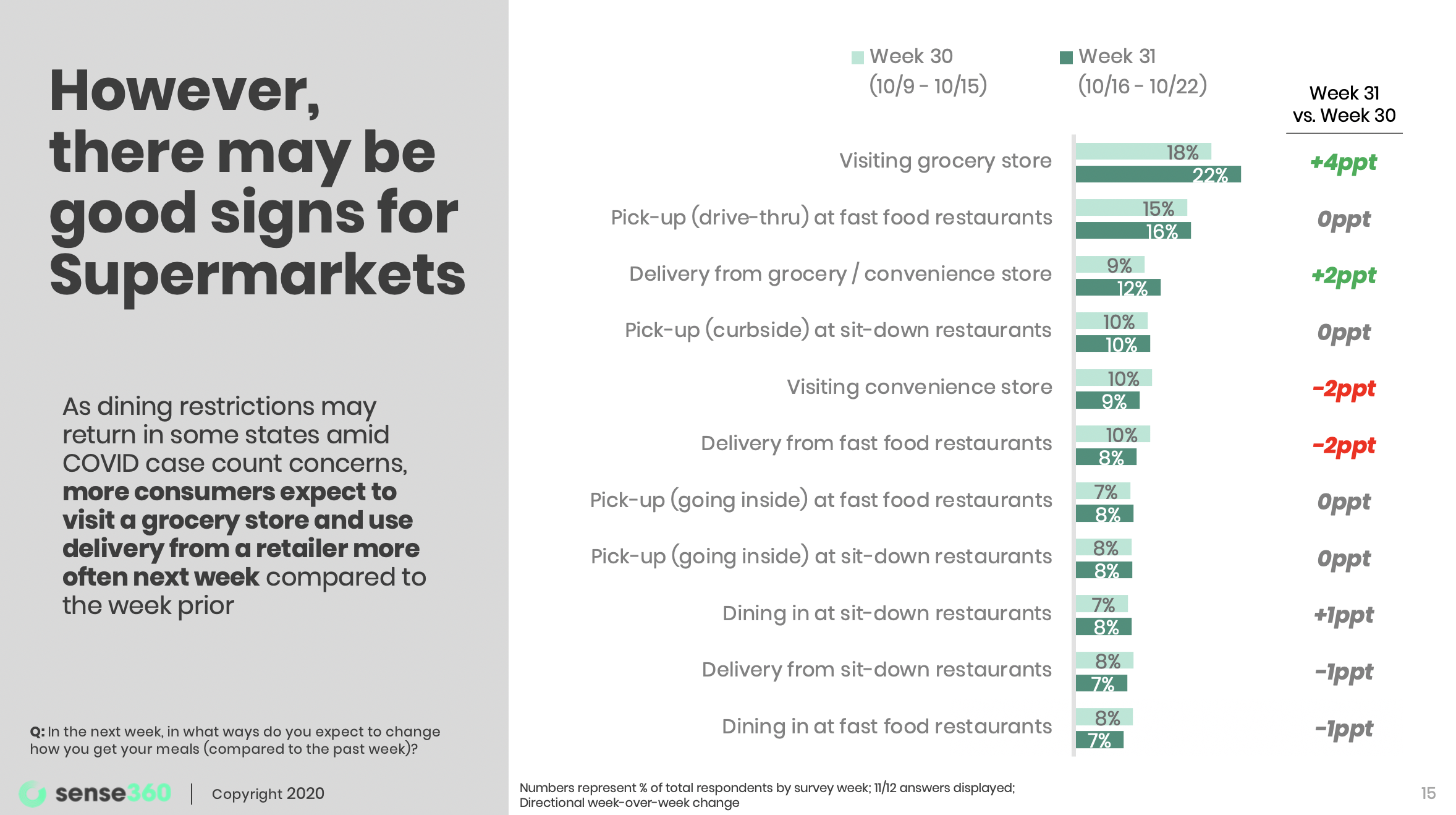 Register for our Insights Briefings, a weekly webinar series packed with insights on the retail, restaurant, and CPG industries. Learn more and register here.