Now that the country has mostly reopened, and 12 states have lifted all restrictions on dining-in at restaurants, we analyzed Sense360 foot traffic and survey data to understand whether consumers are starting to return to pre-pandemic levels of restaurant activity. 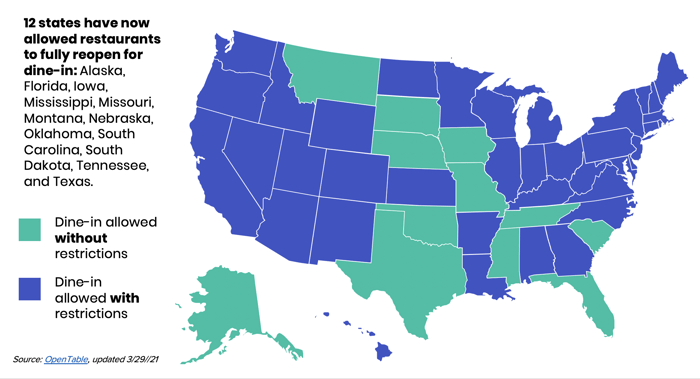 Using the blue line above as the national average, we indexed the following states against it. The stars on the chart below correspond to the dates when mask mandates were lifted in those states. Fully reopened, restriction-free states (MS, FL, TX) are trending above the national average in total volume of restaurant foot traffic, and there was an acceleration of foot traffic visits following the mask orders being lifted. (Note: while Florida still has a mask mandate, there are no restrictions on restaurant dining).

Concerns declined faster in restriction-free states. For the past year, we've been conducting a daily survey on consumers' level of concern over the virus. When it comes to the most concerned response, "it's an even bigger threat than most people realize," there have been recent divergences between the national average and reopened states. Residents of Texas and Florida have recently reported that concern subsiding.

As the country opened up, consumers increased their restaurant visitation in the later dayparts (dinner and late night). Later dining happened nationally, and this trend was emphasized in restriction-free Texas, but not by much. This could be due to the mask mandate being lifted, decreased concern levels, and warmer weather.

Restaurant foot traffic is also improving on Mondays-Thursdays more than Fridays-Sundays, nationwide and slightly more so in Texas.

In conclusion, Texas fully reopening and cancelling all COVID-19 mandates has definitely improved restaurant visitation, but so far it’s relatively gradual and hasn’t caused things to bounce back to 2019 levels.

On April 13, 2021, we will share an analysis of the ongoing chicken sandwich battle between Popeyes, Chick-fil-A, Wendy's, and all of the new players that have entered the fray. Register here.