How could a second stimulus package impact the food industry?

How badly do consumers need a second round of stimulus checks?

Survey results show the need is pretty high. The focus of today's analysis was consumer expectations toward another potential round of stimulus checks.

This is based on a survey we fielded to the general population over the weekend, so it's hot off the presses with a sample size of roughly 1000. We asked consumers if they expect to receive a stimulus check this time around, who received one in the past, how it was used last time, and how people expect to use it if they receive another one again in the near future.

For context on the importance of this, the first wave of stimulus checks that hit most American households in mid-April did coincide with the first period where we saw restaurants start to make a recovery compared to retailers on a share of foot traffic basis. 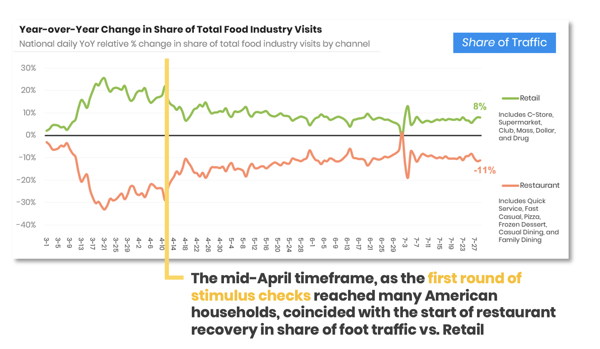 And while the stimulus checks themselves were not the only reason for restaurants' initial recovery, they certainly did play a role. The impact of not having another stimulus check reach the American population sometime soon could be far-reaching for both restaurants and retailers, because of the extent to which it's kept consumer spending afloat during what has been a very tumultuous period for the American economy.

So while Congress has not reached a deal yet, another round of stimulus checks are part of a bigger set of options Congress are considering. Other factors under consideration include further unemployment benefit extensions, home eviction moratoriums, increased funding for the PPP program, and liability protection businesses that operate during the pandemic.

These factors could all certainly affect the economy heavily. Also, Congress had originally scheduled upcoming August recesses, which could further delay new legislation for a pretty long period of time if agreements aren't made within the next few days.

So with all of that at stake, how are consumers expecting the stimulus negotiations to play out, and how much does it matter to them?

When looking at the first round of stimulus checks, about 80% of American households did receive some form of a stimulus check (and it was clarified with the respondents that this is separate from an unemployment payment).

This time around, about half of people do expect to receive a stimulus check again. Of the 31% who are currently unsure, over 80% of them did receive one last time, too. So if the eligibility rules are similar to what occurred last time, we should expect about 80% of American households to get a stimulus check if a second round is approved. 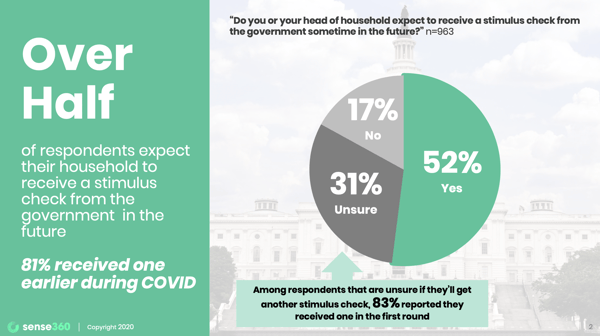 How did people use their stimulus check if they received one last time?

Generally, the most common thing that people used the last stimulus for was paying bills that otherwise would have gone unpaid. This could imply a future impact to the real estate market, which has been significantly influenced by eviction moratoriums that won't necessarily continue going forward. About half of people said that they would not have been able to do something like pay their rent, had it not been for that check. Additionally, about a fifth of people paid off other loans or forms of debts.

As far as general consumer spending outside of debts or bills, the types of things that were most commonly purchased with stimulus money include household items and groceries.

How badly do people need another stimulus check?

When the first stimulus check went out, 42% of people said it was desperately needed to keep them from running out of money. American consumers are in largely the same boat now, with 40% of people now saying they desperately need it to stay afloat. Consumers in Rural and Urban households are much more likely to be in dire need than Suburban households. 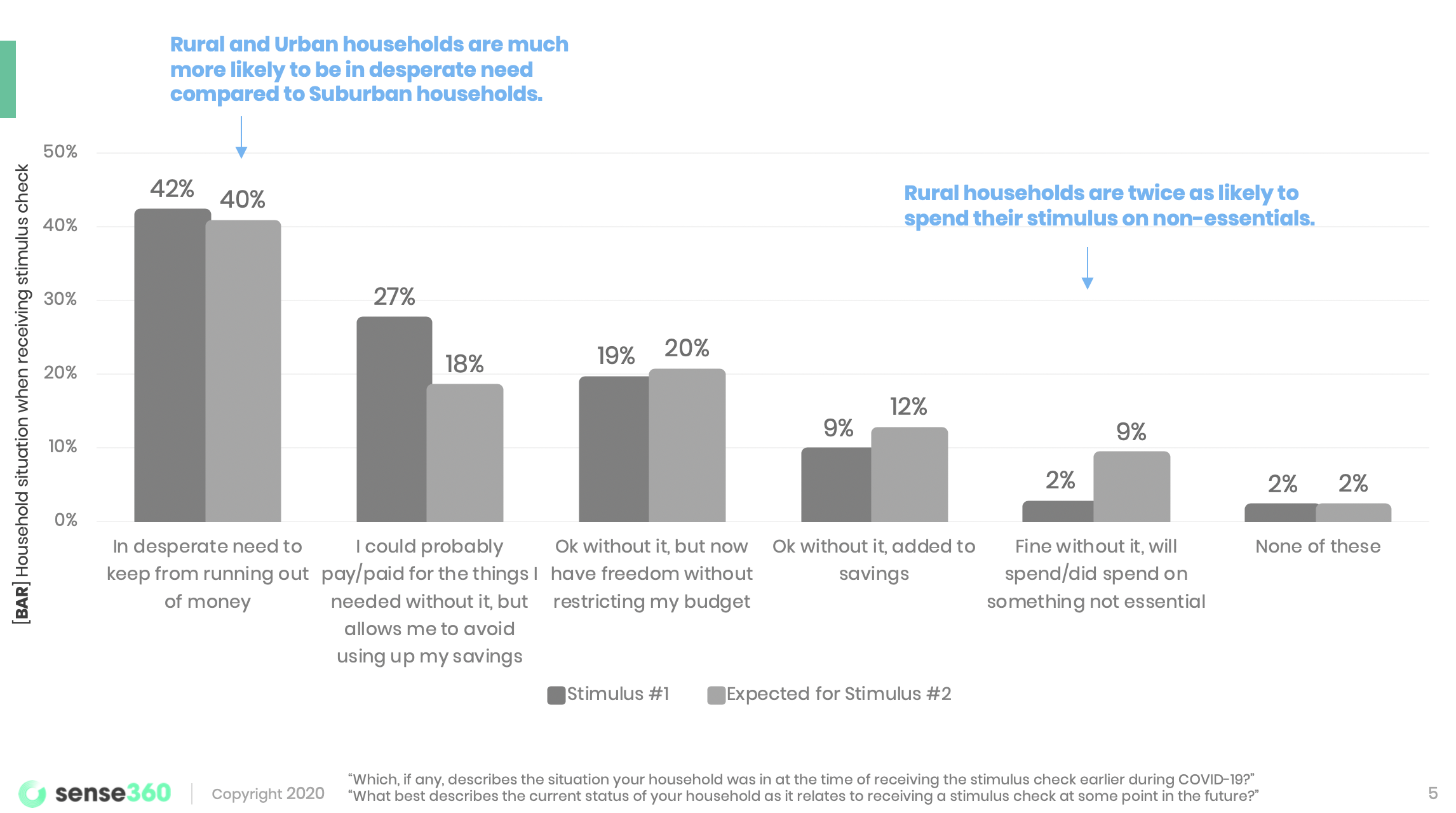 To provide more detail, we asked survey respondents to allocate what percentage out of a 100% total they would spend their stimulus money on, in a variety of categories.

When we look at the food category - groceries and restaurants - 27% of the total dollars are expected to be spent on a combination of groceries (20%) or restaurant food and beverage (7%).

To put this in perspective, while it's only 27% of the total, if the American households receive a trillion dollars in total, 27% of that is still $270 billion. Within that, even if restaurants received 7% of a trillion dollar stimulus, that would be $70 billion.

To give you an idea of scale, a brand like McDonald's generates something like $40 billion in total enterprise revenue of all of their locations. So the amount of consumer spend that could go towards restaurants from another stimulus package could be larger than the annual revenue of a brand as big as McDonald's.