Consumer media consumption and attitude toward lockdowns has changed

Much has changed in the past year. Since the start of the pandemic, Sense360 By Medallia has been conducting daily research on consumer behavior and sentiment.

Nine months ago, we fielded a national survey which asked consumers about their media consumption habits and attitudes toward government-mandated coronavirus lockdowns.

Last month, we fielded the same survey again to see how things have changed from 2020 to 2021.

People are relying less on local and online news, and more on national TV news

Survey respondents were asked, “What is the top way, or the top ways, you found out about the latest state and local policies regarding Coronavirus?  Select up to 3.” 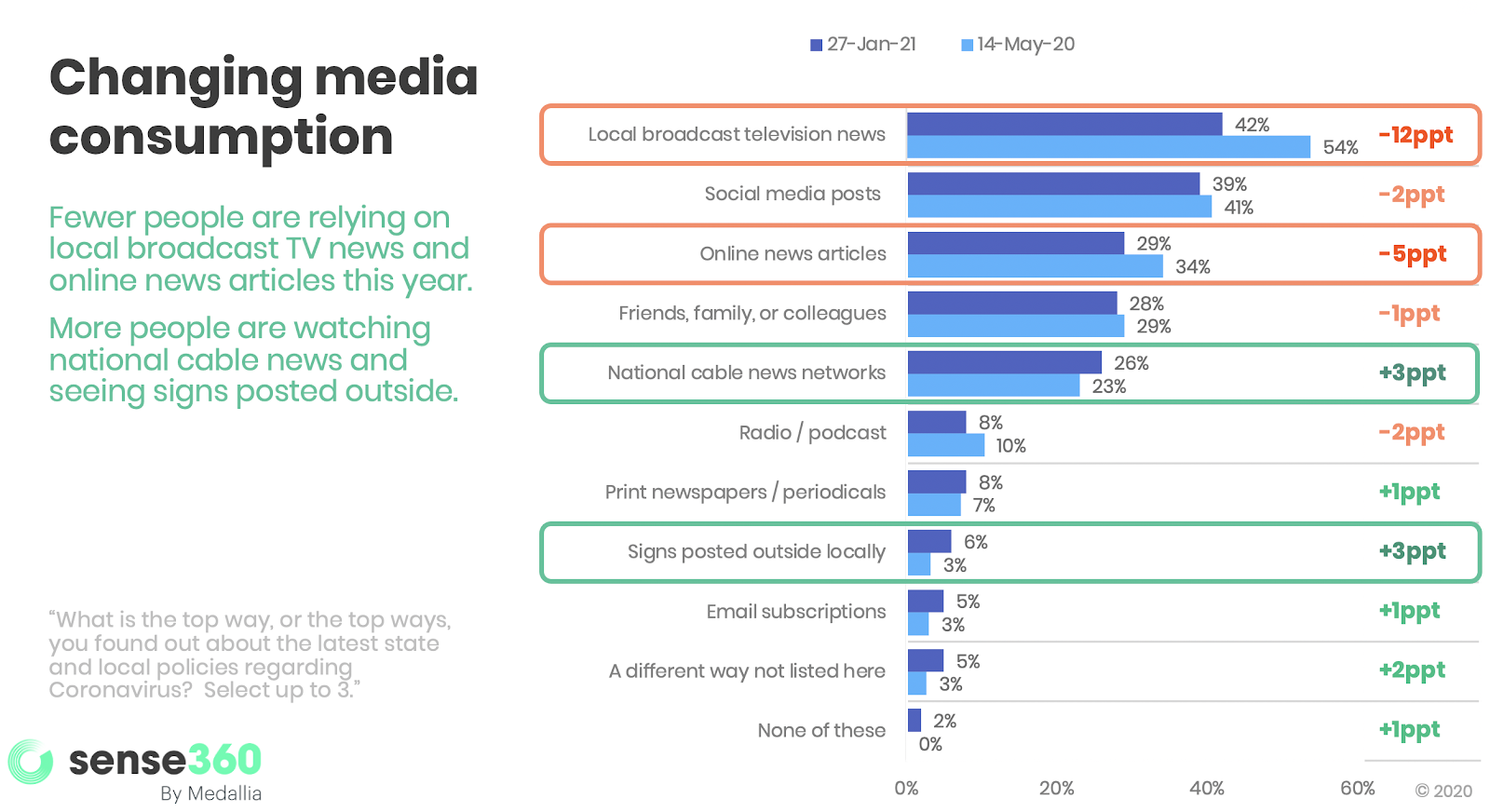 The shift away from local news is likely due to the fact that last year, different states and municipalities had very different lockdown orders at different times throughout the year, and local news was necessary for consumers to understand what the status was in their area.

The shift toward national news could be due to the fact that by now, lockdowns have been mostly lifted nationwide. Or, it could potentially be due to the new White House administration and increased willingness to watch national news to get Presidential updates.

Respondents were asked, “What do you think was the primary driver in your state / local government’s decision to loosen or shorten any Coronavirus restrictions?” 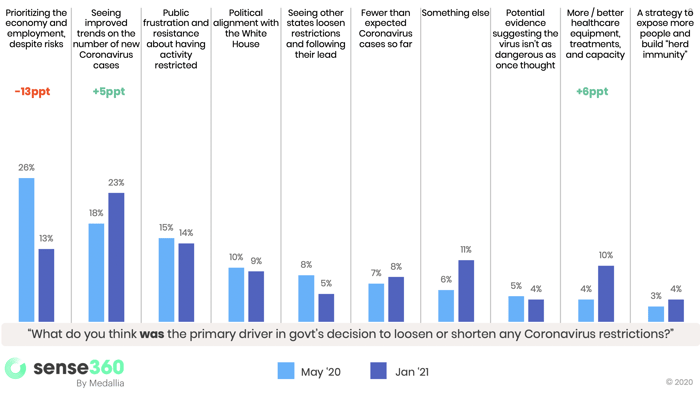 Last year, people mostly believed that lockdowns were relaxed due to governments prioritizing the economy. There was a large decrease in that belief in 2021, at -13ppt lower than in 2020. By now, the lockdown's impact on businesses and employment has been substantial.

This year, the most popular belief is that lockdowns were relaxed due to improving trends in COVID-19 cases, a +5ppt increase over last year. There was also a +6ppt increase in people believing that hospital capacity was a driver.

According to the CDC, cases peaked on January 8th followed by a steep decline, which likely influenced these findings from the second survey fielded on January 27th.

What do people think should be the reasons why governments relax lockdowns?

This year, significantly fewer people (-6ppt) believe that improving COVID-19 case counts should be a driver of relaxed lockdowns. This could possibly be due to rollercoastering case counts in many states throughout 2020, or it could be due to a belief that positive case counts are inflated because of inaccurate testing.

On the other hand, more people (+6ppt) believe that lockdowns should be relaxed due to public frustration with their activity being restricted.

There was also a -4ppt decrease in the belief that lockdowns should be lifted due to evidence suggesting the virus isn't that dangerous - potentially because people have become wary of "fake news" sources which contradict the primary media narrative.

This year’s top reason: 23% of people believe lockdowns were lifted due to improving COVID-19 case counts, and most (26%) agree that this is a good reason. 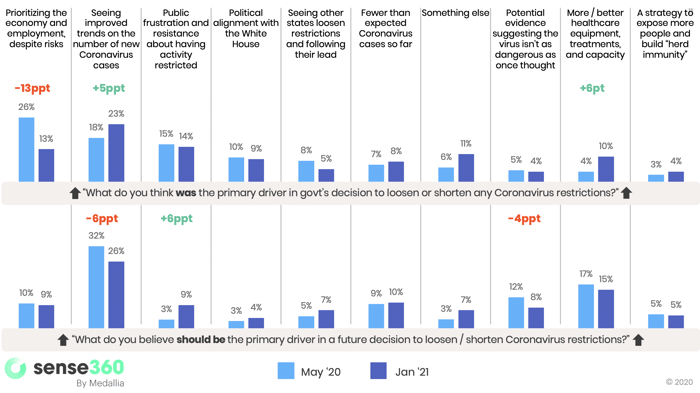 It seems that this year, there is more agreement between governments and the public regarding why lockdowns should be lifted. The fact that consumers are watching more national broadcast TV, as was shown in the first chart, may support this notion.

We asked consumers to what level they agree/disagree with the following eight statements:

This year, more people feel that others are prematurely easing up on social distancing. There's more consumer confidence that businesses are following safety/sanitation protocols. More people have gotten used to the lifestyle changes brought about by the pandemic. And more people feel better about returning to normal activity because multiple states have reopened.

More people feel that the U.S. is not handling the crisis better than other countries. And while people generally don't think that restrictions are too strict, this opinion has lessened in prevalence since last year.

For more insights like these, register for our weekly Insights Briefings every Tuesday at 9:30-10am Pacific.

The insights above derive from a nationally executed survey, first fielded on 5/14/20 with n=523 respondents, and fielded again on 1/27/21 with n=1,018 respondents. Responses have been weighted by gender and age to align with census representation.