Consumer behavior in response to COVID-19 in the Midwest region

As COVID-19 case counts ease up in parts of the country, the Midwest has been outpacing other regions when it comes to retail shopping and restaurant dining activity. In today's Insights Briefing, we analyzed leading indicators on the future of COVID-19 and consumer activity in the Midwest.

Looking at the state level, every state in the Midwest has also been outperforming the national average. Particularly Wisconsin, which saw very positive foot traffic trends back in July and August. Unfortunately, this was followed by an increase in COVID-19 case counts, which is a relationship we've seen in our data before. Hopefully some of the other stats that are currently seeing high foot traffic, like Indiana, don't follow suit.

Our syndicated Daily Food Diary survey asks where consumers sourced their food the day before. We've been fielding this survey since late March, so we're able to trend responses over time. Midwesterners are skewing towards fast food, sit-down restaurants, and Mass retailers, while skewing away from chain grocers. 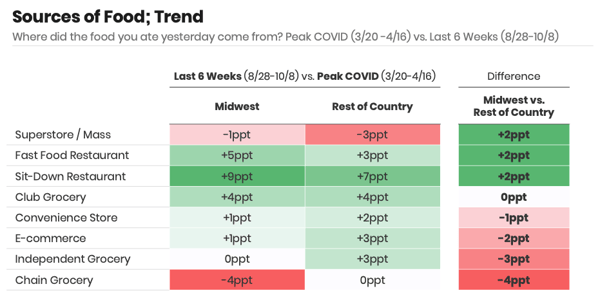 One reason why the Midwest may be outpacing the rest of the country in terms of foot traffic is because they have less pessimistic views about the pandemic.
A question in our syndicated survey asks consumers about their level of concern over the coronavirus. The responses, in order of least to most concerned, are:

But another reason as to why their views might be less pessimistic is due to the demographics of the Midwest. This region overindexes on middle-aged and family-skewing segments (like Affluent Adopters and Family Foundations) moreso than the rest of the country.
This is significant because these segments aren't old enough to be particularly susceptible to COVID-19, nor are they 'yuppie'  types whose white-collar jobs would create major lifestyle changes, like prolonged working from home. The net effect is less lifestyle change and lower concern levels for Midwesterners.

In a survey question that asks what factors are influencing consumers' food decisions, we found that Midwesterners have not been as impacted by financial hardships, their children tend to be at school, and restaurants are largely still open. Their lifestyles have been less disrupted than people in other parts of the country.