Prime Day 2020 was a success for Amazon, even on top of the huge growth they saw since the beginning of the pandemic.
They achieved an high degree of awareness among shoppers, even though Prime Day was scheduled for a different month than it was in previous years.
And they managed to make incremental sales - many of them intended to be holiday gifts, which could be a disruptor to upcoming Black Friday / Cyber Monday deals.
Who is the average Amazon Prime subscriber?
In terms of demographics and behaviors, Amazon Prime users skew female, with children, affluent, working full-time, and more likely to work from home.
Surprisingly, there aren't significant skews in ethnicity, urbanicity or age. When Amazon first rolled out Prime in 2005, it was only available in select cities. Amazon has done an excellent job of customer acquisition to have achieved a user base that doesn't have major urbanicity skews.

What else do people subscribe to?
53% of survey respondents are Prime members, second only to Netflix members (66%). And among non-subscribers, when asked if they planned to add any new subscriptions in the next 90 days, 9% expect to add a Prime membership.

Trend to watch: the growth of Walmart+
Walmart+ launched in September 2020. Amazon Prime now has some competition for the ever-increasing number of online shoppers who are looking for fast delivery options.
10% of survey respondents expect to add a Walmart+ subscription in the next 90 days. More than half of Walmart+ members also have Amazon Prime memberships. This suggests that Walmart+ might be seen as more of a complement to Amazon Prime rather than a substitute.

Amazon Prime Day achieved high conversion rates and marketing reach
Of the 53% of people who are Prime members, 87% were aware of Prime Day and 29% made a purchase on Prime Day this year.
How was awareness generated? Of people who were aware of Prime Day, 34% found out about it on the Amazon website or app. Trailing that were other marketing channels like email, social, ads and TV. Less frequent responses included worth of mouth, online articles, and radio.
Although there is a huge swell of third-party content created around Prime Day every year, like 'Ultimate Guides' and 'Best Deals' articles, these appear to do little in terms of creating initial awareness. 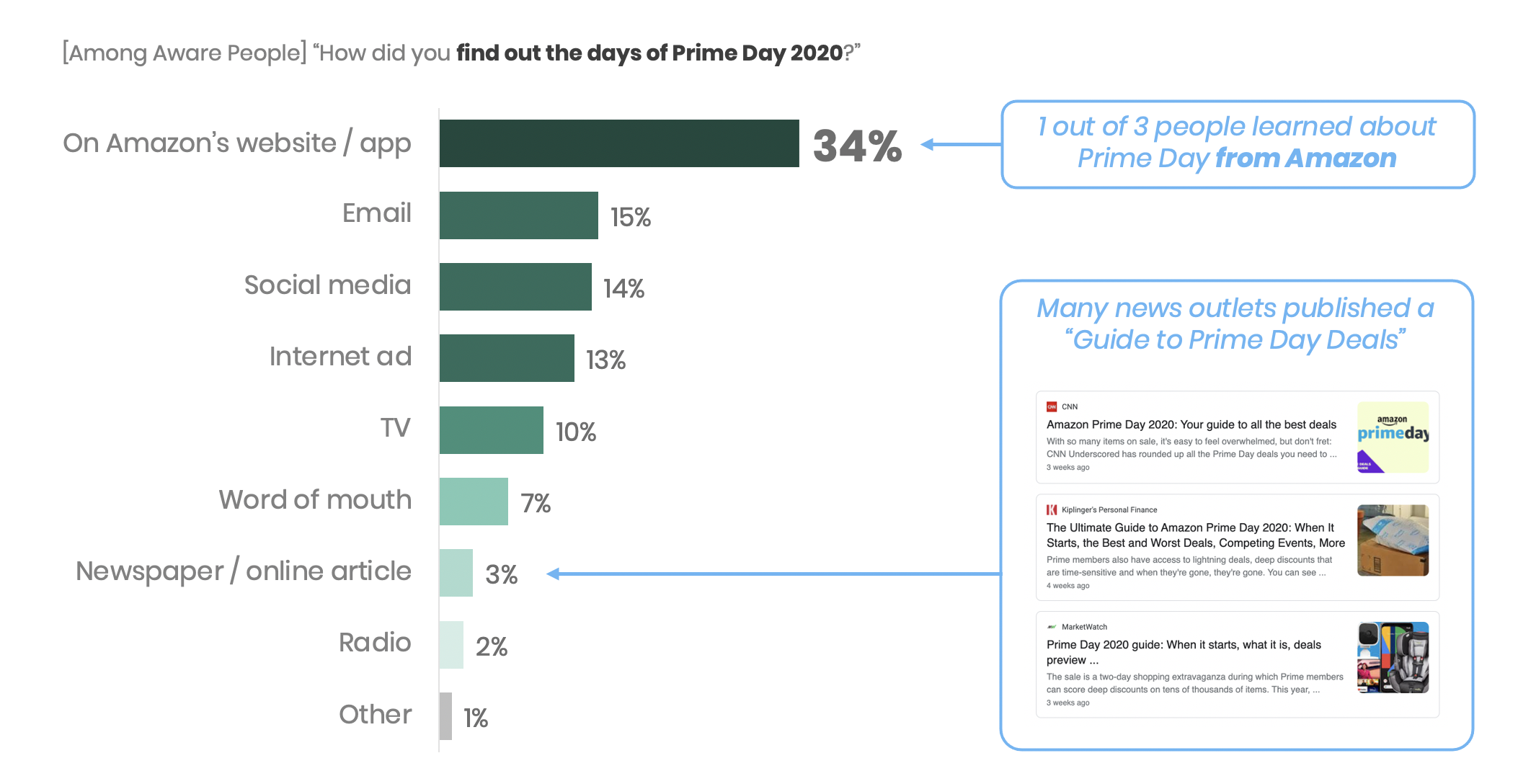 How many new customers did Prime Day generate?
Of the 29% of Prime members who purchased on Prime Day this year, most (65%) had made purchases on previous Prime Days as well. But 35% were new Prime Day shoppers.

31% of Prime Day buyers said they wouldn't have made the purchase if it weren't for Prime Day. Another 33% said that it was cannibalistic - they would have bought it on Amazon despite the sale.

Another 5% said they made a purchase on Amazon that otherwise would have gone to a different retailer. Overall, Prime Day drove 36% incremental sales. 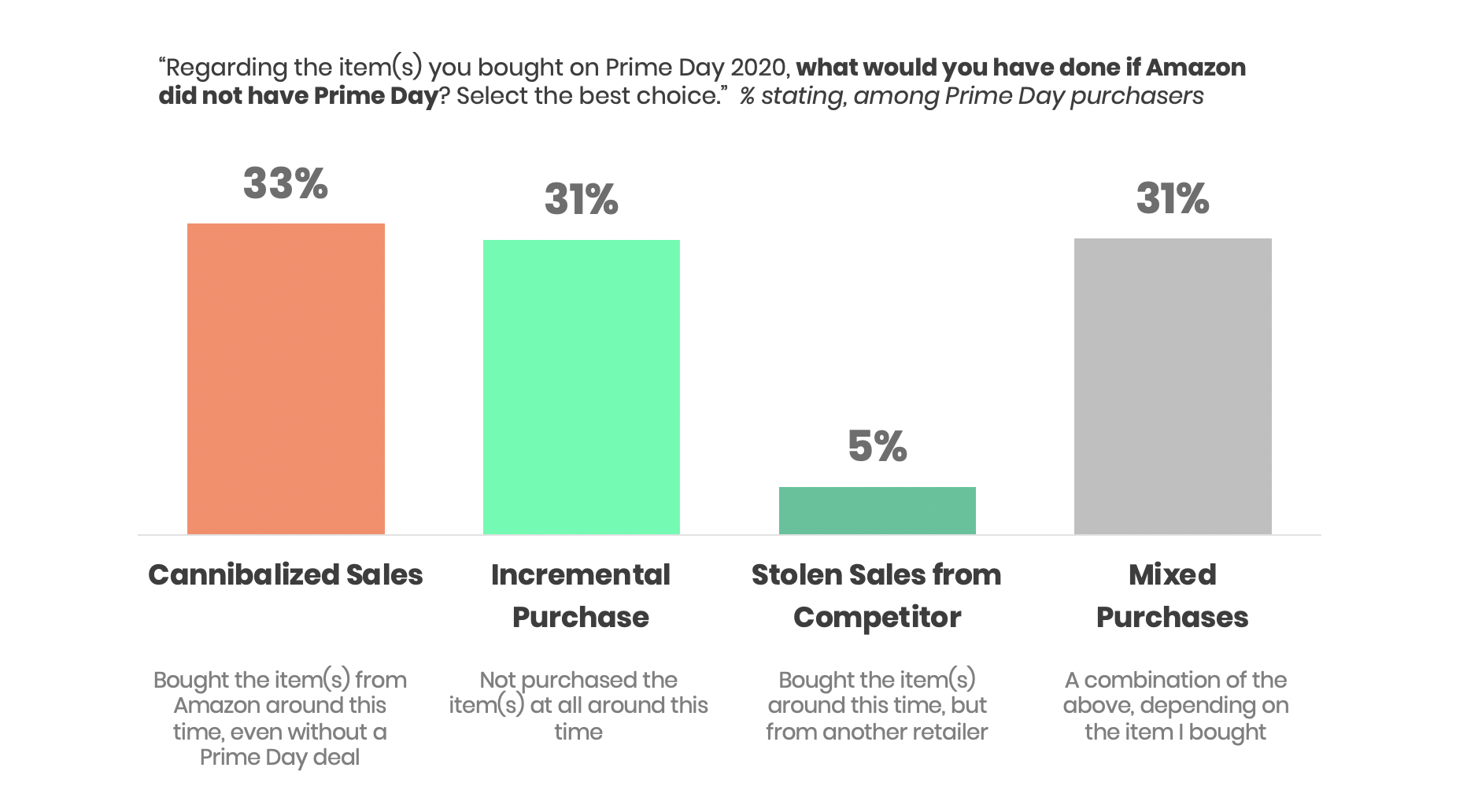 How did Prime Day 2020 compare to previous years?
Though Amazon Prime Day (typically a 1-2 day period in July, except for Oct 13-14 in 2020) is not as big for Amazon as December holiday shopping is, it typically represents a weekly 40%+ sales lift over the weeks that surround it.
Prime Day 2020 saw a +42% lift, which was not the biggest-ever lift compared to preceding weeks, but it is still an impressive performance considering the steep year-over-year growth Amazon was already experiencing during the pandemic.
What did people buy?
Almost half of shoppers bought electronics on Prime Day. Other popular categories were apparel, personal goods, toys, and household goods. Rural households were much more likely to purchase household goods, possibly because they tend to have more storage space to stock up.

Who did shoppers buy items for?
Most shoppers bought items for themselves and their households, although about half said they bought something for the holiday season, which could be a disruptor for upcoming Black Friday/Cyber Monday deals.

Interested in more analysis like this?
Don't miss our next webinar on November 10th - we'll cover a deep dive on Holiday Retail Shopping.
Learn more and register for the webinar here.